There are many versions of PSO such as the hybrid ones where PSO is used along with other algorithms (such as Simulated Annealing) in my publication above. But in general, when we are talking about a pure PSO algorithm we would recognize it as being a single or multi-objective that operates on a discrete or continuous space. The objectives of the algorithm are the things that PSO try to find a solution for. For example, PSO might concentrate on reducing the power consumption of a device without taking into consideration anything else, like the speed of the device. That’s why we developed multi-objective versions to kind of try to balance the solution. Balancing the work of the algorithm to consider more than one objective is part of the Game theory field (if you are curious and want to know more look at Nash Equilibrium and Pareto Optimality).

The original algorithm work on a continuous space. What that means is that it works to solve problems such as the numeric minimization problem I mentioned in the previous Heuristics post. PSO also works on a discrete binary space, which means that the algorithm is used to find a $ 0 $ or $ 1 $ values for the given problem (a simple example can be found in my scheduling paper). But now, let’s go back to our simple minimization problem and try to solve it using PSO. At this point if you didn’t read my other blog post please do so to know what I am trying to solve here.

PSO starts by creating a swarm of particles where each particle is a possible solution to the problem. Therefore, we need to understand what exactly we are trying to solve and how to map it to the objective function of PSO, which is considered the hardest part when designing the algorithm.

The first step is to create the swarm of particles

Where each Particle is an Abstract Data Type (ADT) defined as follows:

Before I explain what each line means I should first explain how a particle behaves in the problem space then get back to our code snippet above.

As I mentioned before, each particle in the swarm represents a possible solution to the problem. And as I also mentioned in the previous blog post, each particle try to improve its solution by learning from two sources: its movement in the problem space and the movement of the other particles of the swarm (through learning from the best solution found by any of the other particles). To watch a simple visualization of PSO click on the image below: 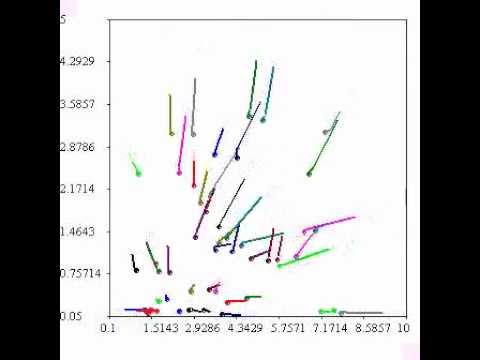 Now, let’s see how that translates into code. The positions list in the above code snippet represent the current values of the variables in the objective function ($ x $ and $ y $) where the velocities list represent the (artificial) velocities (for each position) of the particle in space. We first initialize the values to zeros then update them using random numbers as follows:

Each particle in our swarm keep track of its fitness value and the best positions and fitness found by any particle of the swarm (including itself). Where a particle fitness is the solution it achieved by plugging the current positions list values in the objective function (in our example problem, $ positions[0] = x $ and $ positions[1] = y $). Notice that during initialization we consider the particle’s fitness and positions as the best ones found yet because it might be the case, later we will check that and update with the correct information during each iteration of the algorithm.

After the initialization of the swarm, we check all particles and find the best solution found and keep track of that using the two variables best_swarm_positions and best_swarm_fitness.

Now, we are ready to start moving particles in the problem space by generating new velocities to find new positions ($x$ and $y$ values) and eventually find new solutions (fitness values). The fitness value of each particle in the swarm is going to be updated during each iteration of the algorithm.

For each variable in the objective function, we should calculate a new velocity to later aid in calculating a new set of positions. That is done by calling calculate_new_velocity_value() function and passing the current particle and the variable number to it as follows:

As shown in the above code snippet, the value of the new velocity is the sum of all of the following three parts:

To keep our velocities within our desired range we use the following few lines of code:

Now, we are ready to calculate our new positions values using our new velocities to later calculate the new fitness of each particle.

And again, to keep the values of the positions within control we use the following lines of code as before:

You can also download the full code and play with it yourself. And with that, I finish this post. I hope you learned something new and if you have any question don’t hesitate to contact me. Happy learning!

Heuristics: the art of good guessing

Extracting and Mapping Location Mentions From Texts To The Ground

In this post, I write about the importance of location name extraction and the common techniques to extract them from texts.